Manuel Bottazzo is one of the bike industry's most creative minds, and for the past two and a half decades, he has been shaping how the sport looks and feels. #Words by Colin O’Brien 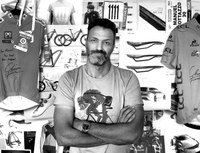 If you're into road cycling, chances are that you've used something designed by Manuel Bottazzo. The Italian is one of the bike industry's most respected, and prolific, designers, and over the course of a career almost three decades long, he's worked on everything from grand tour-winning bikes and components to shoes and clothing. He's done kits for World Tour teams and advertising campaigns for major events. And his products are everywhere. Do you like the Fizik shoes or the graphics of Pinarello bikes? He did those. Remember the iconic design on Bradley Wiggins' bike for the Hour Record? He did that, too. We can't start listing off the greatest hits in his portfolio, because we'd run out of space, but we do want to introduce you to his work and his ideas because we think he's one of the most interesting people in cycling.

How did you get into cycling?

My dad was a track cyclist, after the war, and he tried everything to turn me into a bike racer. He didn't succeed, because like every other Italian boy at the time, I loved soccer and I lived to play ball on the street, kicking around with my friends. I joined a club and had some good results playing as a goalkeeper, but it wasn't going to become a career, and then I joined my first design agency, where the boss needed someone who had some ideas about how to make bicycles look good. Everything started like that, as is almost always the case, totally by chance. I actually think the first thing I designed for a bike was for the Mercatone Uno team – where Eros Poli raced.

When did you start to fall in love with it?

Cycling was something remote for me in the beginning, but by immersing myself in that world, I began to realize that there was something that fascinated me, a deep side, a real struggle with oneself for every rider, a strong challenge with the mind. I always say that road cycling is a sport that comes with maturity, I think it's difficult to make children fall in love with it, because it's a sport that often leaves you solitary and requires great suffering before you get to the fitness levels that allow you to actually enjoy the bike. You have to be willing, you need a desire for solitude, a determination to dig into ourselves, but if you have all that, then the reward for that sacrifice will be enormous. I really like a quote from Alfredo Martini, the most famous manager of the Italian national team: “Cycling is knowing oneself. It teaches you to know each other, to understand each other, to comprehend and – something which is not easy – to recognize the value of others.”

What was your first memory of cycling?

Very clearly, my dad pushing me off down the little street in front of our house, and getting a taste of that flying sensation. That's something I dreamed of doing with my own daughter, I think it's an indelible memory for all of us, perhaps similar to the first time a child walks. It's an unforgettable event. If we're talking about real cycling, it was on my dad's old road bike,a dark green Lygie. As a kid I thought it was horrible, but looking back on it now, it was beautiful, the rich paint, with all the writing in gold, and the chrome brightly polished. It was a work of art. He kept it in the living room, covered with a bedsheet. Fausto Pinarello gave me my first road bike in 1996 and that really ignited my passion. It was a Pinarello Paris, in aluminum, white and pink, the colors of Team Telekom. It had belonged to Rolf Aldag. Beautiful. With it I made my first climbs, the first conquests, and my love of cycling was truly born. I haven't stopped since.

How did you start in this line of work?

I'm not sure if I've ever started working, because for me, it's a pleasure. My daughter asked me once why I decided to be a designer, and I thought about it and thought about it, and looking down at my hands I focused on a big cut on my thumb, which is the sign of my first creative idea: I was six years old and coming back home from school, when I found an opened can of meat on the ground. For whatever reason, upon seeing it, I had the idea to do something special at home, and when I picked it up, it cut my finger deeply.

Today, that thumbprint is my logo because I think it perfectly represents the beginning, my first creative idea.

How long have you worked for Pinarello?

I started in 1992, I'd just come back from Paris and I was looking for a place to start doing this job. I was literally taken on as an assistant at no cost, but as destiny would have it, that little design studio had just started working with a bike company in Treviso, where Fausto had just taken the reins. They wanted to give some color to the bikes, they wanted to stand out, and it was the perfect job to put the new guy to the test. I've been there 26 years now, and seen a lot, I was there in the old factory and saw the new one being built, but above all I grew up with the boys, with the men, who made Pinarello, I lived with and lost Andrea [Pinarello, who died tragically young in 2011], and shared a life with Fausto. In parallel, I grew up, I built my own family, and my own studio.

Do you have a favorite thing that you've designed?

I've done a lot of things, tons of them. I actually find it hard sometimes to look at old hard drives, because they're full of so many beautiful things, so many memories, challenges, satisfactions. But if I have to choose one, in terms of commitment, satisfaction, success, it's absolutely the launch of the Dogma F8. It was a bike that marked a profound change in Pinarello. Everything was done very quickly, because that was our strength, we were small, but fast and efficient, with clear ideas. And we weren't wrong – today it remains the greatest success of Pinarello. It's the kind of thing that in other companies would require huge resources and budgets. We proved that with the right ideas and the right people, we had no rivals. I'm proud to be a part of that.

How is an idea born?

Usually the day after a big presentation. I'll come home, and often the first question I have in my head is, “And now? what am I doing next year?” I think my secret is to never look at other bicycle  manufacturers, I'm away from the cycling world, I'm looking for ideas in other fields, in cinema, in music, in fashion, in everyday life. I go out on my bike almost every day in the summer, often alone or at most with one or two friends, and that's where I can find the ideas, the right inspirations. Pedaling alone, talking to myself like a mad man – that's when the mind becomes free, that's where creativity explodes.

Are there recurring themes in your work?

I love dynamism, so in all my graphics there is always the sense of being projected forward, the graphics must "push" the bike, even when it's stopped it should look fast, made to fly. I love the raw frame, I like touching it, passing my fingers over each corner, on every curve, to understand where the colors can flow, where there could be the point of contact or of detachment. After that, I let it sit in my office for a few days without doing anything, I just look at it when I come in, or when I'm drinking a coffee, and slowly I start to have different ideas, different perspectives, but everything has to come from the bike. From there, I can start dressing her.

What makes a truly great product in your opinion?

Emotion. I'll only buy if the thing excites me. These days I'm lucky to do things that I love – bikes, shoes, clothing, which I want to wear. It's all to my taste, because I can't design just to please a client. I don't like to do three or four proposals, I always try to focus on the best one, and if I propose it, it's because I'm sure it's the right one. I am a designer who prefers beauty to functionality, and I know that that way of thinking can worry some people, but I love beautiful things more than functional things. Santiago Calatrava's Ponte della Costituzione bridge in Venice is one of the most dangerous and defective bridges in the world, but it is monstrously beautiful. The Guggenheim Museum in Bilbao is completely useless, but I have sat for hours admiring it. I loved what Steve Jobs and Apple did with Jony Ive. They made useless and expensive computers that heated up like a gas boiler, but they were beautiful, all glass and clean edges. We should surround ourselves with beautiful things. Nature has taught us that.

How do you see the future of design?

Honestly, I haven't a clue, you're asking the wrong person. I don't think about the future, or at least I try to think of it as little as possible. I live in the present and I try to enjoy every moment. My future, and that of my design, we're making today. If I work well now, that future will surely be beautiful. It's like riding a bike, if you keep pedaling, you can get anywhere, but you have to remember to keep raising your head often to enjoy the view. Keep looking around you, because life is now.